skip to main | skip to sidebar

Mercury and the Murd Cover - Now with colors!!! 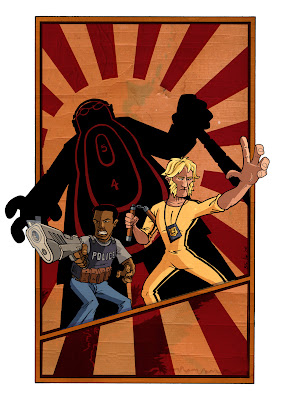 Shawn just e-mailed me the colors for my M&M cover, and I must say, Kevin Volo did an outstanding job! There are a few minor errors on the gun coloring that are apparently being corrected presently, but I thought I'd post it anyway. I especially love the giant sunburst in the background and the water staining details. It really makes my mediocre drawing come to life. It almost looks like a real comic! I'll post the final version with the title and indicia once Shawn sends me the finished version.
Posted by Big Jim Miller at 9:03 PM 1 comment: 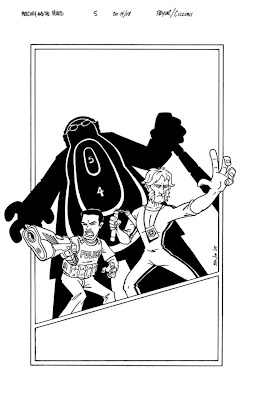 When I went to the CGS SuperShow in Reading, PA back in early September, I was fortunate enough to meet Shawn Pryor, the owner of PKD Media, a small indie comic book publisher. He is the creator, writer, mastermind, pr genius, and all around nice guy of his two series, Mercury and the Murd, and Exo-1 and the Rock Solid Steel-Bots. Anyway, Shawn saw some of the sketches I had done, and asked me if I would do a cover for an upcoming issue of Mercury and the Murd. I was extremely flattered and terrified, but I said I'd give it a crack. So, here's my final inks for the cover to issue #5. The image was very much inspired by the poster to Clint Eastwood's 1973 film Magnum Force. It's going to be colored by an associate of Shawn's, so hopefully I'll be able to post that, too, once it's done. Shawn's a super nice guy, and a consumate professional, so be kind and go to his website, and buy his books!!!
Posted by Big Jim Miller at 8:09 PM 2 comments: 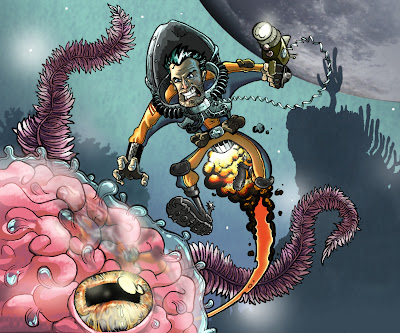 My friend Tom Sales wanted a crack at coloring my Fear Agent piece, and I think he did a hell of a job. Check it out!
Posted by Big Jim Miller at 11:45 AM 4 comments: